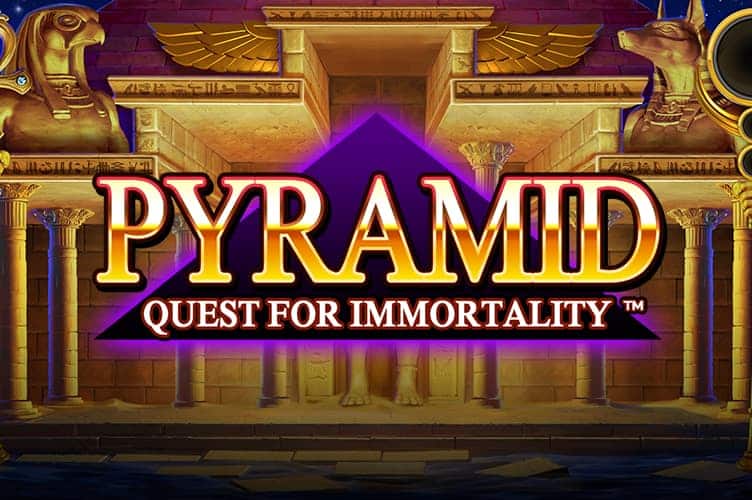 Pyramid: Quest for Immortality is a video slot game from NetEnt, where gamers seek the priceless treasures of ancient Egyptians Pharaohs.

Prizes will be won when the player finds different kinds of treasures such as the bejeweled scarab beetles, golden snakes and eagles, and even the mistresses of the ancient Pharaohs buried with him, often alive.

There are also bonuses like the Avalanche Feature with consistently rising prize multipliers and Wild Ankhs.

Built with an Ancient Egyptian Pharaoh’s tomb-like inspiration, the game comes with a tomb-like structure with different sculptures of dead/ancient Pharaohs with animal-like head in the background.

There are three sculptures in the background, one on the left with an eagle-like head, the other on the right with a dog-like head and the one in the middle sitting on a wooden throne. The game’s graphics is simple but elegant, with no lags.

Playing the game is quite easy and simple. There are two options, which includes the auto bet and the max bet.

The auto bet enables you to play continuously multiple games without interruptions. You can set the game to autoplay from a minimum of 10 to a 1000 max spins.

Also, the game comes with some wild symbols like the golden snake, the Pharaoh’s mistresses, the eagle, and the beetle symbols.

Like all the top online video slot games developed nowadays, you can enjoy playing Pyramid Quest for Immortality using any of your mobile devices.

Since it was developed by NetEnt, it comes as no surprise that the game works well on all mobile devices, because they are known to be one of the leading providers of online casino games.

The game offers the same excitement as playing on desktops or other platforms on many of the best UK casinos.

There are several bet-levels and coin-value combos to pick from, meaning you can find your perfect spin-stake, which can start from 0.1 coins per spin.

The game’s staking system is very easy. Just combine 10 bets together with bet-levels between 1 and 10, and also coin-values between 0.01 to 2.0 coins.

Pyramid: Quest for Immortality is a game for those who love the ancient Egyptian times and also have a love of exploration and treasures, no matter whether the site is on Gamstop or not.

The game comes with great theme music that is soothing to the players playing the game and it also fits the game’s theme.

The game comes with a jackpot of 3,600,000 coins that can help you increase your payout, as the game proceeds.