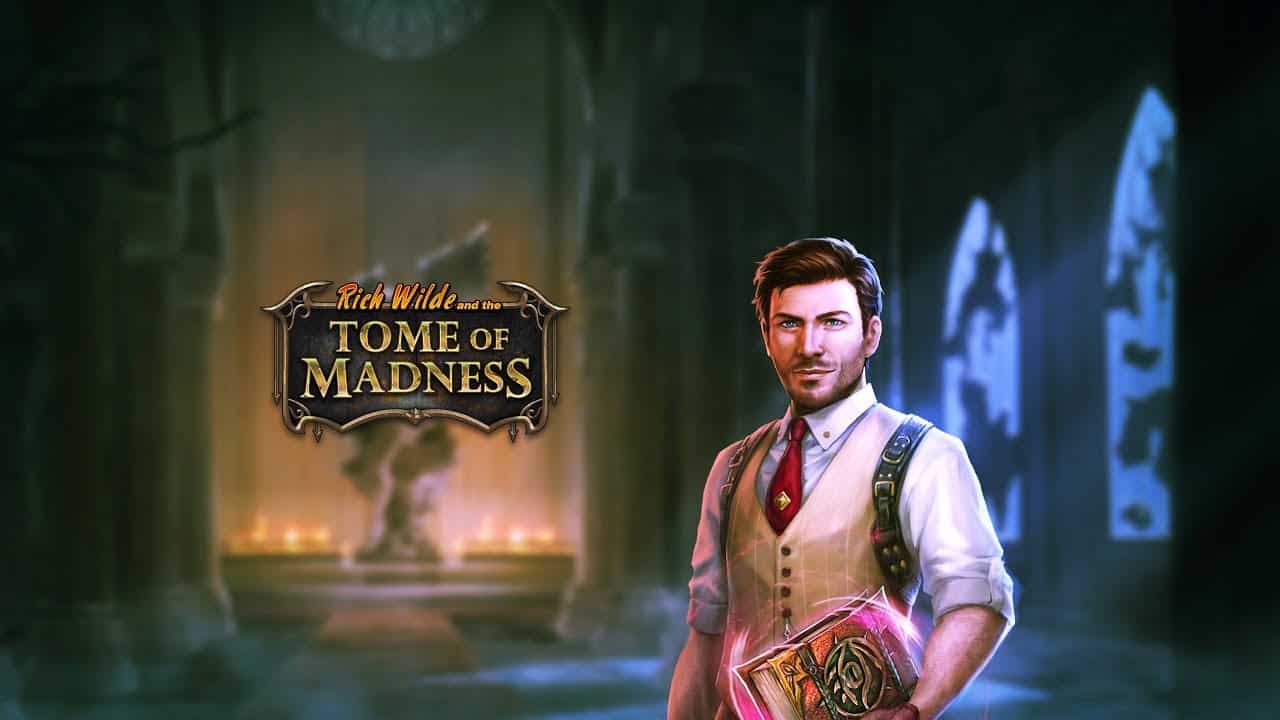 PLAY’n GO’s intrepid explorer, Rich Wilde, is back and embarking on yet another epic adventure, only this time he is unravelling darker mysteries in Rich Wilde and the Tome of Madness.

Tome of Madness is the fourth chapter in the Rich Wilde series of games from PLAY’n GO. The handsome adventurer first appeared in Aztec Idols in 2013, then travelled north in Pearls of India 2014, and finally featured in the hugely popular Egyptian themed Book of Dead in the same year 2014.

Wildes latest adventure the Tome of Madness is based on the fictional writings of H.P. Lovecraft. Cthulhu is a giant sea monster that resembles an octopus with tentacles, green rubbery skin, and dragon-like wings. It is said that Cthulhu makes people lose their minds just by looking at the creature, which is quite horrific.

Get started on Tome of Madness

Looking dapper and guided by the Book (Tome) of Madness, our favourite hero, Riche Wilde, will embark on a quest to unlock the secrets and hidden fortunes of the Cult of Cthulhu.

Tome of Madness is a high volatility game, cascading 5×5 cluster wins slot, with an RTP (Return to Player) value of 96.59% and maximum win potential of 2000x of the total bet.

Meaning you will definitely need big pockets to take away all the coin you will win. Check out Rich in the Tome of Madness at BestUK.Casino to get in on the action.

Wild Symbols will substitute for all regular symbols and help to complete winning combinations. The Special Wilds (Book) and the Cthulhu Mega Wilds do not form part of the original reel set; however, they are added to reels when bonus features are triggered. Rich Wilde is a Multiplier Wild Symbol that will substitute for any symbol and double the winnings.

It’s important to remember this is a cluster wins game with cascading symbols. Wins are awarded when a group of 4 or more matching symbols (touching horizontally or vertically) land on the reels.

The maximum payouts for 10 or more winning combinations are listed as follows:

During regular gameplay, a pink Eye Mark will appear in a random location on the grid. If a winning cluster lands on top of one of these locations, two Special Wilds will be added to the grid once the win sequence is complete.

The Portal and Special Wilds

A circular portal placed to the left of the grid lies at the heart of the bonus features. Every time there is a winning cluster of symbols on the grid, the portal charges up and becomes more powerful. Consecutive wins will keep charging the portal and the total number of winning symbols will be calculated and displayed in the centre of the Portal graphic.

Collecting 27 winning symbols will randomly add two Special Wilds to the grid, and if they are part of a winning cluster, the VOID Portal effect will be activated. Void will randomly remove every instance of a random symbol and use them to further charge the portal.

Other World Free Round Feature

Collecting 42 winning symbols will trigger the Other World Free Round Feature which contains three random Portal effects. For every 3 symbols collected over and above the 42 that triggered the feature, players will get an extra Portal effect (up to a maximum of 7). During this feature, a Portal effect is activated until no more wins are possible after a cascade.

When the Other World Free Round Feature is triggered, 11 or 12 Eye Markers will be visible on the grid. An eye will open if any of the symbol clusters are won on an Eye Marker location. Opening all the Eye Markers will unleash the Mega Wild Cthulhu Symbol. This is a giant Wild symbol that is added to the reels and continues to move down a step with each cascade, increasing the chances of winning on every spin.

The Free Spins Feature in this game doesn’t look and feel like it would in a traditional slot. When triggered, The Other World Free Round rewards the player with a free round that may include several winning combinations (with the help of additional effects), and a chance to unlock the Mega Wild Cthulhu Symbol.

Slightly darker and more esoteric than its predecessors, the Tome of Madness is a worthy addition to the Rich Wilde series.

Trying to understand the features may be confusing at first, but it all starts to make sense as players start spinning and venture deeper into the game.

There is plenty of fast-paced action and players who appreciate the thrill (and rewards) of high volatility/variance games will feel right at home. We recommend playing the game for free or if your daring, real money at BestUK.Casino.

Mercy of the Gods Slot Review

Narcos, one of the most popular and highly watched Netflix shows, now has become the…

Don’t miss out on these sites