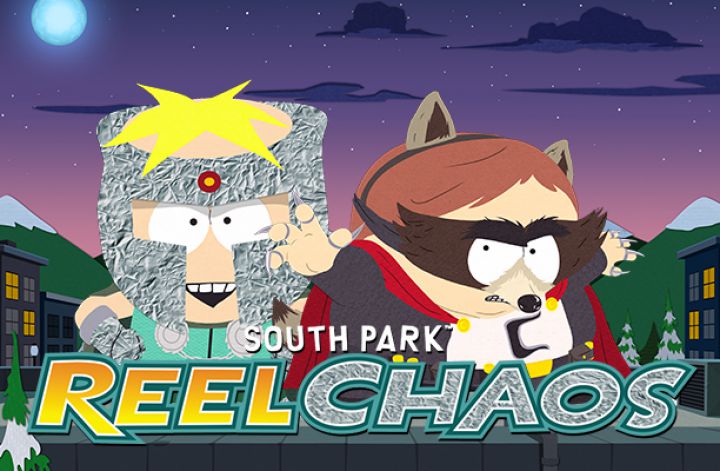 Here the gang appears as super-heroes fighting Professor Chaos in a fun and dynamic game. However, this slot game was discontinued and removed in 2017, but it can still be played for fun.

When it come to looks, the game feels very suitable in terms of wanting to bring the superhero excitement that South Park offers to punters.

The wild symbols reflects the overall theme which gives the game a comedic vibe. The features are many and sometimes scattered but all in all NetEnt does a very good job of delivering South Park inspired humour to your device screen.

The game comes with colourful characters and a plethora of extras such as multiplying slots symbols, Stacked Wilds, Overlay Wilds, Multiplying Re-Spins, and Running Bonus Spins.

These combos are very good choices for the game that works out really well in the execution of the entire game.

The Stan’s bonus feature is also very desirable, which triggers all the 5 reels to re-spin that eventually increases the multipliers from 2x to 10x.

In 2014, NetEnt released a mobile version of this slot game using the NetEnt Touch technology and also the famous HTML5. The casino game comes with the same features such as gameplay, symbols, graphics and also the theme as the desktop version.

The game is completely fun to play on your mobile devices most especially Android and iOS powered devices. This is actually no surprise since NetEnt games are high-standard.

Betting in this game is easy and straightforward. For example, you start with a $50 bankroll placed on the 20 paylines and it was chipped by small payouts.

Then suddenly, you hit a bonus round that comes with a multiplier that boosts you up by $10 to $15 on an average. At this point you can definitely end up with a total of $84 in winning, definitely a good way to start.

South Park Reel Chaos is a fine slot game by NetEnt in terms of graphics and its presentation. It comes with a good number of slot features and bonuses and as well as interesting comedic touches.

NetEnt has managed to grasp the main essence of the South Park TV show with this particular online slot game. The game checks all the list ranging from excitement to creativity.