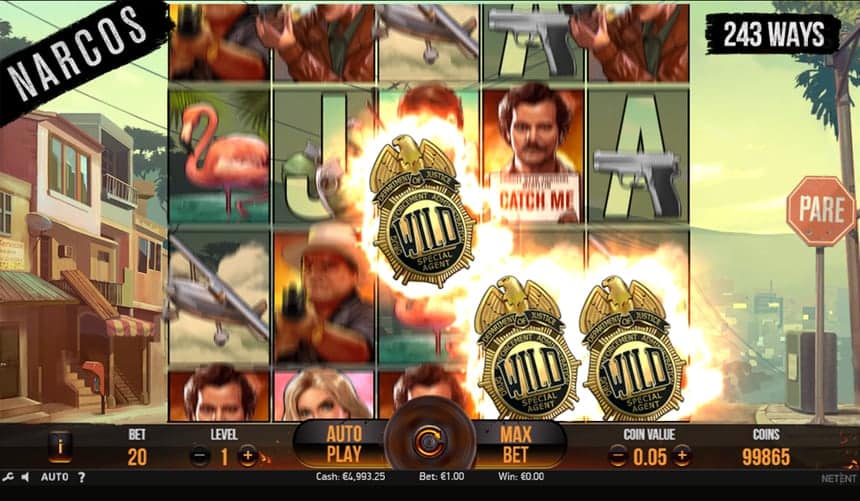 Narcos, one of the most popular and highly watched Netflix shows, now has become the basis of an online slot from software provider NetEnt. Just like the show, the game is set in Columbia in the early 1970s when drug dealer Pablo Escobar, ran his drug empire and the DEA set to track him down.

People who watched the famous Narcos television series would expect the game to be filled with a lot of violence and drug dealings. But the software provider, NetEnt, has deliberately toned down the level of violence. Still, players can expect a lot of explosions, guns, piles of cash as the five fully stacked reels spin.

Narcos slot offers 243 Ways to Win and comes equipped with different features for an immersive game experience. Free spins, walking wild symbols and a unique locked up bonus can offer some of the most generous payouts in the industry.

Will this game blow away the opposition? Check out and play the slot free of cost at BestUK.Casino or check out our in-depth Narcos slot review below before playing it for real money.

The Narcos slot is played over 3 rows on 5-reels. In this game, the Win-all-Ways mechanism is used, which means players will have 243 different ways to win.

This video slot is available in NetEnt Touch variant which means that people can play this game on any portable device also from a minimum €0.20 to a maximum €400 per spin with a fantastic RTP of 96.23%.

The game is not the least bit boring because Pablo Escobar is the lead character and there is a lot of action around him. Also, the game is equipped with so many features to make the gameplay exciting and adventurous keeping you entertained.

This feature is activated in the Narcos slot when a wild symbol becomes a part of the winning combination.

During the free spins feature, it continuously moves until they disappear from the playing field.

When this feature is triggered, a car would appear on the game screen coming after the reels. From the car itself, a person is seen shooting in the direction of the reels. This, in turn, would transform the high symbols into Wild Symbols, hopefully creating wins.

Players need to land three locked up symbols in order to activate the Locked Up feature while playing Narcos slot. It is interesting to note that Pablo Escobar is depicted on the Locked Up symbol.

The player would be taken to a new gaming field with the Golden Locked Up and Locked Up symbols on the reels. On this new playing field, the locked up symbols will offer a cash prize of x1 to x10 times of initial stake amount.

When the Golden Locked Up symbol lands on the reel, players can earn cash prizes of x11 to x26 times of the betting amount. If this is a part of the winning cluster, one of the following mechanisms will be awarded:

This feature is triggered after landing 3 scatter symbols on the reels. If players are successful, they will receive x10 free spins.

The free spins can transform one or more high symbols into wild symbols. At the same time, players can enjoy the Walking Wild feature, which moves one position to the left until it finally disappears from the reels.

Apart from the Wilds, Scatter and Locked Up (Pablo Escobar) symbols, the Narcos slot features x10 regular symbols. Out of these, four are low symbols denoted as A, K, Q and J.

The other symbols come in the form of a blonde woman, a cartel member, flamingos, small planes and two DEA agents named as Javier Pena and Steve Murphy.

There is a table displayed on the game screen where players can see what the symbols look like and their playing values. The values are shown in the form of coins and players can multiply them with the coin value they are going to play.

The developers and the creative department at NetEnt have done a splendid job in recreating the drug dealing and violence in Columbia in the early 1970s with the Narcos slot.

The appearance and game theme fits perfectly with the Columbian cartels with intuitive sound settings in the background.

The game can be played at any BestUK.Casino for free or real money. We recommend players to check out the Narcos slot and experience a new world of online gaming.