Home » How to play Texas Hold’em 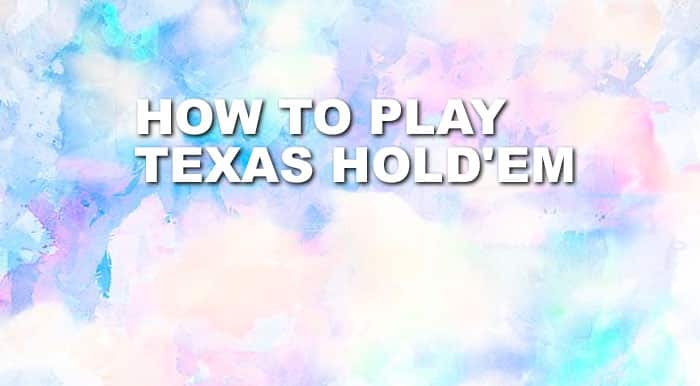 Texas Hold‘em or Hold’em is a variant of the poker games, and it is played around the world. The game’s simplicity and popularity over the years has inspired a vast collection of strategy books that offer recommendations on how to play the game properly.

The game’s popularity began to increase in the early 2000s and this was due to the massive exposure on the Internet, TV and even popular literature.

Since that time, Hold’em has replaced all other poker variants as the most common game in any online casinos. Additionally, with widely televised main events such as the World Series of Poker and World Poker Tour, the game continuously soars higher in the ranks.

The game is relatively easy to understand compared to the other poker variants. Therefore, if you are looking to get started with the game of poker, Texas Hold‘em is a good start.

The game consists of two cards known as “Hole Cards”, these cards will be dealt face down to each player and afterwards, five community cards, placed face-up by the dealer.

A set of three known as the Flop with a single card known as the Turn, and an additional card called the River will be distributed. The players will then be faced with different options to either check, fold, raise or bet after each deal.

Every poker game comes with its own proprietary rule that players must follow and Texas Hold’em is no exception.

The number one rule is that one player will act as a dealer for each hand. Additionally, the position known as the button will have to rotate clockwise after each hand. The two players on the dealer’s left-hand side will post small blinds and big blinds respectively.

Furthermore, the first betting round starts with the player sitting next to the big blind on the left-hand side. Another rule is that betting is continued clockwise and each player can either choose to fold, raise or call the previous amount of the highest bet.

Texas Hold’em is usually played with the use of small and big blinds, which are known as forced bets. Although, in some cases antes, which is a forced contribution by all players and can be added to the blinds, most especially in the later stages of the game.

The blinds are rotated after each hand as the dealer is being rotated. The small blind posted by the player to the left of the dealer is mostly equal to half the big blind. The big blind will then be the minimum bet of that particular hand. After the first round of betting is completed, the person after the small and big blind will start the next round.

The best way to win a Texas Hold’em game is when you are the only player to bet while others fold. When this happens, you will be awarded the pot (this is the entire bet on the table). However, in any case, where two or more players are remaining after the final betting round, a showdown will occur.

In the showdown stage, each player will then proceed to play their best poker hand from the available seven cards, which consist of the two hole cards, and the five community cards. Each player can choose to use one, two or none of their two hole cards to form a final five-card hand.

On a final note, when it comes to Texas Hold’em, if more than one player shares the best hand, the pot will be split equally between them. Also, any extra chips will go to the first players after the dealer in clockwise order.

In some cases, players can have closely valued, but not similarly ranked hands. Moreover, in determining the better hand, care is required. When a hand involves less than five cards like three-of-a-kind or two-pair, Kickers (which is the highest other card) are employed to settle the ties. It is important to note that the card’s numerical rank is of utmost importance and suit values are not relevant.